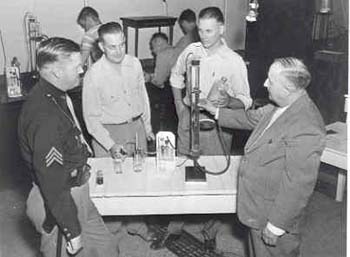 Before World War II, the automobile was becoming popular on America’s roads. Once a novelty of the wealthy, the car quickly found its way into the fingers of persons with lesser incomes. Despite prohibition in 1920, more citizens were getting blitzed before driving.

Dr. Emil Bogen began studies in 1926 to see if inebriation could be scientifically measured. It was already determined evaluating blood provided a good indicator of how intoxicated a person was, but by checking both blood and breath, Bogen discovered a person’s breath was a dependable predictor for blood alcohol content.

Bulky and innovative, the Drunkometer was an advance in the fight against drunk driving. After suspects blew into a balloon, a chemical solution was added. The solution darkened in color and reflected the amount of alcohol.

Using mathematics which Harger developed, the amount of alcohol could be detection. Harger went on to push for laws to outlaw drunk driving. Prohibition was coming to an end and people getting behind the wheel, drunk, were starting to be more than just a nuisance.

Harger saw his invention patented in 1936 and Indianapolis’ police tested the device on New Year’s Eve, 1938. Harger’s crusade had just started. He went on to serve as a member of the National Safety Council which established guidelines and limits for drivers’ alcohol intake.

Harger’s device evolved into a Breathalyzer which revolutionized police efforts to measure alcohol. The Breathalyzer moved the Drunkometer to the next level. It could determine the proportion of alcohol in a person’s blood.

Robert Brokenstein was instrumental in advancing the Drunkometer. Borkenstein saw the inherent difficulties in using the Drunkometer in the field. He continued to work on devices which would combat drunk driving and in 1970 introduced a coin-operated Breathalyzer.

Installed in cocktail lounges, a person could blow into a straw for twenty-five cents. Depending on the Blood Alcohol Content, the user would see a message saying: “Be a safe driver,” or “Be a good walker,” or “You’re a passenger.”

The work of Harger and Brokenstein eventually led to convenient forms such as Apple Watches.

In the 1930s the National Safety Council, in league with the American Medical Association, teamed up to develop the standard for state legislatures.

0.05% and below: Defendants should not be considered under the influence

0.05% to 0.15%: Not considered “under the influence” but taken into account if other evidence is presented

0.15% and above: Presumed “under the influence” of alcohol

Fascinatingly, the justice system was especially lenient in part because of the many recent failures of alcohol prohibition in the U.S. during the 1920s. Even organizations like the AMA and the NSC thought it best not to be too harsh on people who drove drunk.

The guidelines published by the NSC remained in place until the late 1960s. American courts saw anything under 0.15% as not being worth the cost of prosecution.