Fleeing From a Police Officer

What to Do When Charged with Disobeying Police Order 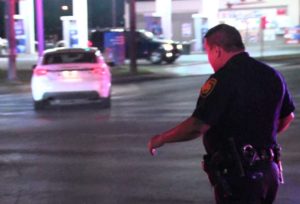 You are required to stop your vehicle for a uniformed police officer when you are directed to do so. If you fail to stop and instead you flee from a police office, you could face misdemeanor or even felony charges. Running from the police is rarely successful and when you are eventually caught, you will always face more serious consequences than if you had simply stopped and complied with the officer’s order.

If you are worried about being in trouble with the law, do not try to outrun a law enforcement officer. Instead, know what your rights are. You have the right to be free from unlawful searches, the right to stay silent, and the right to contact a lawyer. Stop as directed by the police and contact an experienced traffic attorney right away so your lawyer can help you to respond in an appropriate way to any questioning by law enforcement and to any accusations made against you.

If you are accused of fleeing the police and you are facing charges because of it, you need to get prompt legal help right away. NY Traffic Firm can provide you with assistance in responding to the criminal charges that you are facing.

Give us a call as soon as you’ve been accused of trying to run from the police so our New York traffic crime lawyers can assist you in trying to fight the serious criminal charges that could result.

NY Laws On Failure to Stop for a Police Officer

New York Penal Law section § 270.25 explains the offense of fleeing from a police officer. Under the law, you are not allowed to ignore an instruction to stop your vehicle if a uniformed police officer tells you to pull over, or if a marked police vehicle indicates that you need to stop the car.

You can also be charged with the offense of unlawful fleeing from a police officer in a motor vehicle under the same statute if you are directed by police to stop and you try to escape the police by engaging in reckless driving.

Penalties and Consequences for Fleeing from a Police Officer

The penalties and consequences of unlawfully fleeing from a police officer are going to vary depending upon the specifics of your situation. If you are simply guilty of violating NY Penal Law section § 270.25 because you ignore a direction and try to get away by driving too fast or too recklessly, you could be found guilty of a Class A misdemeanor. This misdemeanor offense could result in a substantial fine, could leave you with a permanent criminal record, and could even result in you being jailed for up to a year.

There are circumstances in which you could face even worse penalties. Under New York Penal Code section 270.30, you could be charged with second degree fleeing from a police officer if the law enforcement officer suffers any kind of physical injury as a result of your conduct when you are trying to flee. If an officer gets into an accident while chasing your car, for example, this could result in you being charged with second degree fleeing from a police officer. This is not a misdemeanor offense. You could be convicted of a Class E felony and could be looking at a maximum of up to four years imprisonment, not to mention a felony on your record.

Things get even worse if the police officer or anyone else is killed because you fled from the police. You could be charged with a Class D felony for first degree fleeing from a police officer, which carries a penalty of up to seven years imprisonment. You could also be charged with additional related offenses as well, if your conduct violates any other laws such as laws against impaired driving.

How a NYC Traffic Attorney Can Help

The penalties for fleeing a police officer are serious, even if the offense is your first one and even if no one gets hurt. You need to understand the possible consequences of being convicted and be proactive in responding strategically to the serious charges that you are facing.

NY Traffic Firm can help. Our legal team has successfully represented defendants accused of fleeing the police. We can guide you through negotiating a plea deal, or help you with introducing doubt or raising defenses to criminal charges with the goal of an acquittal.

Give us a call today to schedule a consultation with NY traffic ticket lawyers to find out more about how we can help you.