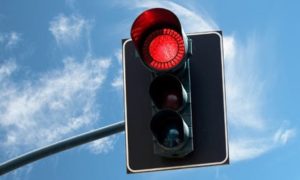 New York traffic law is very strict when it comes to red lights. Motorists who are accused of running a red light could be cited for a moving violation, which means a motorist gets points on his license that could threaten future career opportunities and that could ultimately put his right to drive at risk.

The penalties for running a red will vary depending upon what specific offense a driver is accused of, and depending upon whether a driver is cited by a police officer or is given a ticket because a red light camera captured his violation. Whatever your situation, you should not just accept fines and penalties. You should fight the ticket so you can avoid being found guilty of a traffic offense that could impact your future. New York traffic ticket lawyers can help you.

NY Traffic Firm has extensive experience helping motorists to fight red light tickets. Our experienced legal team can not only argue that you don’t deserve a ticket you get from a red light camera, but we can also help you to fight citations for running a red light that are given to you by a law enforcement officer. It is this type of red light ticket that can have the most far-reaching consequences and that is most important for you to fight.

You need to begin formulating a legal strategy right away after you have been ticketed, and you need to ensure that you don’t just pay a citation, as this is considered to be an admission of guilt. You should call an experienced attorney before you respond to the ticket so you can decide on the best course of action to protect your license. Our firm is here to help, so reach out to us to talk with an experienced legal professional today.

Drivers in New York who run a red light can be cited for a violation of Vehicle and Traffic Law section 1110(a), which is the offense of failing to obey traffic control devices. Drivers on New York Roads are required by section 1110(a) to obey all traffic control devices – like stopping at a red light – unless they are otherwise directed by a traffic officer or a police officer.

A driver who runs a red light could also be cited under Vehicle and Traffic Law section 1111(d), which explains the behavior required of motorists at a red light. Motorists who approach a steady read light must stop prior to entering the crosswalk at the near side of the intersection. If there is no crosswalk, a driver who has approached a steady red traffic light must stop at the point nearest to the intersecting roadway where the driver is able to see approaching traffic. The driver is expected to remain stopped at the red light until given an indication to proceed, which could include a green light.

Section 1111(d) also explains when motorists are allowed to make a right or a left turn. Right turns on red are allowed only after a driver has stopped, and a driver can make a right on red unless otherwise prohibited if the driver has yielded the right-of-way and there are no oncoming cars or pedestrians. Drivers on one-way streets can also cautiously enter intersections after stopping to make left turns under the same conditions, like yielding the right-of-way to any oncoming pedestrians or vehicles.

Drivers who receive a moving violation from a police office for running a red light can face substantial fines, with fines growing higher for repeat offenders. Drivers can also get points on their license for the traffic violation. Too may points accrued in a short period of time will result in the suspension of a driver’s license, which can make it very difficult to get around most places in the state of New York.

The record of the moving violation for running a red light can also impact a motorist’s life in profound ways for a long time after the offense of running a red. Drivers, for example, could appear to be risky policyholders to auto insurers, who in turn will charge higher premiums. A black mark for running a red light on a driving record could also result in a motorist being prevented from pursuing certain types of career opportunities for which a clean driving record is a prerequisite.

Running a red light is considered a serious offense, which also could result in a driver spending time in jail upon conviction.

A fine is not the end of the matter, as much as many drivers would like it to be, so an appropriate response must be formulated when a driver is given a red light ticket.

Simon Kabzan of NY Traffic Firm has represented many motorists accused of running a red light and violating New York’s traffic laws by doing so. Our legal team knows the ways in which motorists can defend themselves or introduce enough doubt about whether they broke the law that they can avoid being found guilty of a traffic offense. We can also help motorists to determine when a plea deal could be their best option to reduce possible consequences due to the nature of the evidence against them.

To find out more about the ways in which our New York traffic ticket attorneys can help you after you have been given a ticket for running a red light, give us a call at any time. Be sure to act quickly and get legal help, as you have a limited amount of time to respond to the ticket and you don’t want to give up your chance to fight.